Bring the Legend home on DVD or Blu-ray!

Do the spirits of a serial killer and his final victim haunt the businesses along Main Street in Sylvania, Ohio?

In 1857, Ohio’s first known serial killer took his last victim in downtown Sylvania, Ohio. He was arrested, convicted, and executed for his crime. For most, that’s where the story ends. For us, it’s just begins.

Within 30 years of the crime, stories began to circulate among residents of strange activity being witnessed in and around the house where the murder took place.

More recently, five Sylvania businesses believe their establishments are regularly visited by the tragic spirit of Olive Ward and her husband, the serial killer Return Ward.

Or, direct from Video Images LLC

Check out the documentary’s IMDB page and leave a review

Legends of the Heartland: The Life and Crimes of Return Ward, vol 1″ on IMDB

A production of Haunted Toledo

The Rough Draft Diaries Paid A Visit To Haunted Toledo 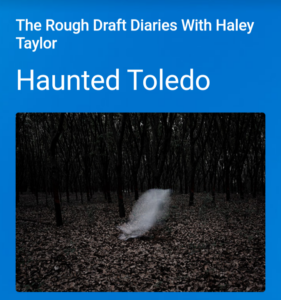 The Rough Draft Diaries Paid A Visit To Haunted Toledo

You may have missed

February 5, 2022
The Ghost of Ohio’s First Serial Killer and His Victim

The Ghost of Ohio’s First Serial Killer and His Victim